VR WOW: What virtual reality journalism and comms may look like 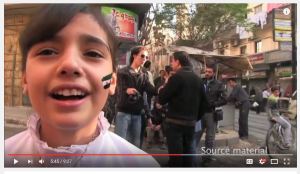 “One of the most boring debates to have is the future of news debate,” someone I rate once said.

“The only people who care about it are journalists. Everyone else is off getting their news from Facebook.”

This is largely true.

I’ve been keeping a weather eye on virtual reality for a while and came across this fascinating TED talk by US virtual reality journalist Nonny de la Pena. In it, she explains about how she is turning story telling on its head by taking the facts and audio from real life scenarios and creating  them in virtual reality.

In other words, you can be standing on the site of a key news event.

She re-created based on source footage a bomb exploding in a street during the Syrian civil war. You can see it around 5’30”.

The risk of fake news isn’t far away.

But just journalism? Or can this be used for story-telling and for giving people a flavour of what it’s like to be on a particular spot?

In a warehouse with slave labour?

In a home with a man with dementia and his carer?

VR PR: What virtual reality can do… for children and old people[VIDEO]

For the last 18-months or so I’ve been helping deliver video skills workshops with one of the brightest people I’ve come across in a long time.

Steven Davies is a freelance cameraman, University lecturer and throughly good chap. A while back I asked about how he saw the future of video.

Virtual reality, was part of the answer.

Virtual reality is footage shot that allows someone with a headset to be immersed in a different world. Google cardboard can be bought for a few quid and is a way to view the content.

I’ll paraphrase him, but the problem with talking about virtual reality is that it’s like dancing about architecture. It doesn’t really work. So seeing this Google clip at #firepro on what virtual reality – or VR – can do in classrooms is inspiring. If you are not sure what it is take a look at this for 90 seconds and see the reaction of schoolchildren. It’s amazing.

And it’s older people too

Don’t think it’s just for young people, too. There is this example where VR works with old people. It puts them in a safe recognised environment and works well with dementia sufferers. You can take a look here. The older person is immersed in an environment.

The opportunites for PR people are immense. It is entirely a new exciting blank piece of paper. The ability is to place the VR headset wearer in an environment. I’ve blogged about this before.

So, seeing as I’m not a political reporter for the last few years I’ve made predictions about what may happen in my corner of the internet.

Looking forward, 2016 will be my seventh year of blogging, my 23rd year in and around the media industry and fourth year in business. I’m struck by the pace of change getting faster not slower. It’s also getting harder.

Last year I made predictions for local government comms that both came true and failed. Ones I got right? Some councils no longer have a meaningful comms function. Evaluation become a case of do or die. People who bang the table and say ‘no’ to stupid requests will stand a chance. Those who don’t won’t. There are fewer press releases. Video did get more important. Customer services, social media and comms need to become best friends. Facebook pages did become less relevant unless supported by a budget for ads. Linked

I was wrong about some things. There was experimentation with social media and new platforms like Instagram, whatsapp and snapchat were experimented with. Not nearly as much as people need to.

The jury is out on content being more fractured. There are still too many central corporate accounts and not enough devolved. I’m still not sure that enough people are closing failing social media accounts.

The flat white economy will form part of the future. Economist Douglas McWilliams gave the tag to web-savvy freelancers and start-ups with laptops. To get things done in 2016, teams buying in time and skills for one-off projects will become more common.

There will be more freelancers. There’s not enough jobs to go around and more people will start to freelance project to project. Some will be good and some bad.

Video continues to grow massively. For a chunk of the year I talked about Cisco estimating that 70 per cent of the web would be video by 2017. By the end of the year some commentators said that figure had already been reached. People are consuming short-form video voraciously. But can you make something that can compete with cute puppies?

LinkedIn will be the single most useful channel for comms people. Twitter is great. But the convergence of job hunting, shop window and useful content will push LinkedIn ahead.

Successful teams will have broken down the digital – traditional divide. They’ll plan something that picks the best channels and not have a shiny social add-on right at the end.

Say hello to VR video. By the end of 2015, the New York Times VR – or virtual reality – videos broke new ground. These are immersive films viewed through a smartphone and Google cardboard sets. By the end of the year the public sector will start experimenting.

The most sensible phrase in 2016 will be: ‘if it’s not hitting a business objective we’re not doing it and the chief exec agrees with us.’ Teams of 20 have become teams of eight. You MUST have the conversation that says you can’t deliver what you did. It’s not weakness. It’s common sense. Make them listen. Or block off three months at a time TBC to have that stroke.

‘Nice to have’ becomes ‘used to have’ for more people. As cuts continue and widen more pain will be felt by more. Some people don’t know what’s coming down the track.

People will realise their internal comms are poor when it is too late.  Usually at a time when their own jobs have been put at risk.

Email marketing rises. More people will realise the slightly unglamorous attraction of email marketing. Skills in this area will be valued.

As resources across some organisations become thinner the chances of a fowl-up that will cost people lives increase. It probably won’t be a one-off incident but a pattern of isolated incidents uncovered much later. The kick-back when this does emerge will be immense. For organisations who have cut, when this emerges the comms team will be swamped. At this point the lack of functioning comms team will become an issue and the pedulum may swing back towards having an effective team. For organisations who have retained a team, this will be a moment to prove their worth.

Comms and PR continue to become female. A trend in 2015 was the all-female team. This will eventually percolate upwards towards leadership.

Comms and PR will get younger. Newsrooms when they lost senior staff replaced them with younger people. This trend will continue to be replicated.

As the pace of change continues training and peer-to-peer training will never be more important. Teams that survive will be teams that invest in their staff. And encourage staff to share things they are good at.

Speclaist generalists will continue to be prized. That’s the person who can be really, really good at one thing and okay to good at lots of others.

Those people with a willingness to learn new skills and experiment will still have a job in 2020. Those that won’t probably will be doing something else. Don’t let that be you.