Packed full of insight it is that rare thing of a free report that will help you if you work even just a little bit in digital communications.

It’s also a document that we often keen going back to so this time around we thought we’d fillet it and, because we love you, we thought we’d publish it in bite-sized chunks so it can help you too.

Much attention has been focussed on the fact that adults spend more time engaged with the media – eight hours 41 minutes – than they sleep which accounts fr eight hours 21 minutes.

More hidden in the report is the conclusion that the differing types of communicatin is leading to a generation gap. Where once post and the telephone was universal now young people only send a letter when they absolutely have to while the habit remains with older people.

The figures cover the first quarter of 2014.

An average day for a UK adult aged 16+ (selected)

eBay overtook Amazon as the most popular retail site with 27.3 million users

Social media use by adults

We are getting used to following two things at once. We may watch television and use the internet at the same time as 11 hours seven minutes worth f media is consumed in that eight hours 41 minutes.

We watch two hours 58 minutes of TV a day.

Mail has fallen 5 per cent in 12-months

20 per cent of adults didn’t get an item of post in the last week.

77 per cent of all UK households have broadband.

61 per cent of all adults own a smartphone.

57 per cent of all adults use their mobile phone to access the internet.

44 per cent of all UK households have a tablet.

60 per cent of adults say that technology confuses them.

49 per cent say technology isn’t making a difference to their lives either way.

24 per cent say technology is harming their lives.

16 per cent live in a mobile phone-only home.

71 per cent of audio activity is radio.

2 per cent have used 3D printers.

82 per cent of households have an internet connection.

66 per cent say that they rely on the post.

23 per cent say they email about work while they are on holiday.

80 per cent say flexible working makes it hard to switch off.

51 minutes a day is social media use.

37 per cent of their time spent using the media is spent on watching TV.

2 per cent of their time spent using the media is spent on print media.

16 per cent of their time spent using the media is spent on text.

18 per cent of their time spent with the media is spent on social media.

41 per cent of adults use the internet to consume news.

6 per cent of their time spent using the media is spent on print media.

49 per cent of their time spent using the media is spent on watching TV.

7 per cent of their time spent using the media is spent on text.

19 per cent play games on social media – the highest of any age group.

74 per cent use a social network.

If they use it they’ll spend one-and-a-half hours using social media a day.

They are watching less TV a day than they did. This has fallen to 148 minutes a day from 154

60 per cent get their news online – three times the amount of other adults.

1 per cent of their time spent using media is spent on print media.

24 per cent of their time spent using media is spent watching TV or films.

30 per cent are likely to use print media – half the adult average.

36 per cent of their media time is spent on social media – double the rate of adults.

75 per cent say they wouldn’t know what to do without technology.

70 per cent say they tell friends and family about new technology.

18 per cent use Snapchat.

26 per cent of their time using the media is spent using social media.

Smart TVs – web enabled TVs – have risen by five per centage points to 12 per cent in 12-months.

Smart TVs account for 45 per cent of TVs sold in the UK.

Sometimes the internet is a wonderful thing in the numbers it creates but most of all the connections it makes.

I posted to Twitter a query that I wondered if people could help come up with some stats to show how amazing the internet is in numbers. And Twitter delivered just as it so often does. Rather than just favourite the responses and move on I thought I’d blog the results.

Six people retweeted the request and four people came back with some results. Here are those results.

It breaks down into the picture today and predictions of what is likely to happen.  There’s a health warning to this. You’ll quickly lose track of the numbers and your jaw will hit the floor.

The internet: what is here today

The internet in realtime is a brilliant link that shows how quickly is generated. The figures whizz by across a range of platforms like twitter, Instagram, google, foursquare and others and start from zero from the second you log on.

Alternatively, internet live stats looks at the big picture. The really big picture of how many internet users there are in the world (2.9 billion and counting when I looked) and the number of websites (almost 1 billion when I looked.)

There is also a rather cracking digital marketing website that seeks to pull together a blizzard of stats from across the internet over who is using what and where.

And also the excellent Shift Happens update for 2014 with a blizzard of stats in a YouTube film.

And also the wearesocial global social media survey for 2014.

The internet: what is yet to come

Here is a link to infographics about the internet of things. This is part of the internet that has yet to arrive in a widespread way. This is the device that has its own IP address and can communicate over the internet. This

It talks about the £30 billion industry around wearable tech and the prediction that by 2020 there will be 50 billion things connected by the internet.

There’s also a rather good internet trends deck which is worth carefully studying.

An amazing statistic like a battering ram breaks down doors.

Here’s a good one.

For every one person who buys a copy of the Express & Star in the West Midlands borough of Walsall there are 10 on Facebook.

That’s print outnumbered by digital by a rate of 10 to one.

It’s the single most powerful argument to use social media in local government you can ever have. Why? Because it shows it’s mainstream. In fact, so mainstream it dwarfs what used to be the colossus of the printed Press.

It’s a cunning wheeze I first came across at the landmark LocalGovCamp in Birmingham in summer 2009.

Paul Cole, a talented man from Derby, spoke about how he did it. People never fail to be impressed by the idea.

You create a Facebook advert — but before you hand over cash you are given the chance to narrow down who you want to advertise to.

It’s at this point that you can get the juicy stats.

Here’s how to come up with one than your community:

3. Fill in the advert. Just type ‘hghghg’ if you like.

4.Upload an image. Any will do. This gets you to the place where you can access figures.

5. Look at the figure in the far right of the screen. That’s the figure of people registered on Facebook for the UK.

7. Select the radius you want to search from from the centre of your area with 16 km the shortest distance.

8. Click search and you have a figure for your own community.

10. Add an interest – like football, knitting or fishing – and search on that term too.

OPEN DATA: A warning from history

Was this the first data visualisation? Florence Nightingale uses statistical data to argue for healthcare reform for soldiers in the Crimean War.

They may not have built a chimney sweep Google death map.  But their approach was similar. Collect the data. Publish it. Draw conclusions. Argue for change.

Look at Florence Nightingale in her funny lace bonnet. Historian Dr Stephen Holliday in BBC History Magazine August 2010 writes about how she used statistics to 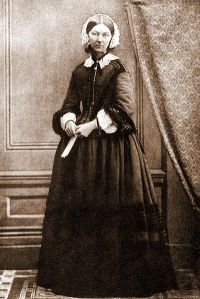 revolutionise the care of soldiers in the Crimean War.

By using statistics – data  – she painted a picture to show a revolution in care was needed.

“When she reached Scutari the base for casualties from the Crimea,” Halliday writes, “Florence calculated that deaths from disease were seven times those arising in battle and used the campaign to campaign for better food, hygeine and clothing for the troops.”

Battered by the force of Florence’s figures and cutting edge reporting that forged the reputation of The Times the British government was forced into changes.

After the war Nightingale used her Royal connections coupled with arguments based on charts and tables to press for better standards for soldiers who even in peacetime had death rates double that of civilians.

The result? Death rates fell by 75 per cent.

Florence herself said that statistics were “the cipher by way we may read the hand of God.”

We may have lost that religious zeal but it’s an argument Tim Berners-Lee would recognise as a modern-day Florence Nightingale with a passion for data.

Did she get it right all the time?

No. Here’s the warning from history.

She used statistics to wrongly argue cholera was an airborne disease.  It wasn’t.

It took London GP Dr John Snow to collect his own data on death rates in his patch to argue they were caused by a contaminated water supplies.

So what’s the message to today’s open data pioneers?

That first data visualisation you have in front of you may not be the whole picture.

The map that Dr John Snow drew to discover that cholera was a waterborne disease.

There may be more to it.

Statistics were once hailed as the magic cure-all that revealed a hidden truth.

It’s been said that all data in some form or other is political. Let’s not see open data similarly tainted.