Commscamp: 29 things from me and a thank you 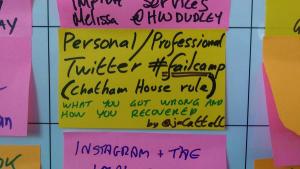 A couple of days after a good event is often the time to reflect and make sense of things. So with a cup of coffee that’s what I’m doing.

Commscamp was that good event and one that drew 154 comms, PR and digital people from across the public sector in the UK.

As an unconference, the day has no agenda, with the sessions getting decided on the day by people who came along. There were NHS, local government, Welsh Government, UK government and one or two third sector.

Was it a good event? It seems slightly self-regarding to call something you helped organise ‘good.’ But I’m sure my fellow co-organisers Emma Rodgers and Darren Caveney would agree that it really, really is the attendees who make it. We just provide the space.

Here are 20 things that struck me.

So, it all started with a whimper and ended with a bit of a bang.

Jo Smith has taken a massive step towards clearing her name and accepted an out-of-court compensation payment from Argyll & Bute Council rather than press ahead with her claim for unfair dismissal. You can read all about it in the Dunoon Observer.

Okay, isn’t this just a backwater story? Actually, no. If you work in local government, are a  comms person or speak or have ever learned something at a conference this all is pretty significant. Had Jo lost there may have been a chilling effect on all three.

It’s an attractive story on the face of it. Council spin doctor accused by an anonymous source in the Glasgow Herald of saying at a conference she’s been spying using social media. Uproar at conference. Politicians get angry. She gets sacked.

Only thing was it was not true. There was no uproar at the conference. The story emerged four months after it took place. The comments some people attributed to her at the event were not made. People at the conference confirmed this. There were no spy accounts despite a thorough and expensive internal investigation. Jo even topped the feedback as being the most popular speaker with attendees. Some uproar.

Disclaimer: I was at the uproar-less conference and confirmed this less exciting version of events to the Glasgow Herald journalist who first wrote the non-story and failed to quote me. Or organiser Nick Hill. As a former journalist that’s, how shall we say, somewhat disappointing. I also contributed to the internal inquiry along with others who were at or spoke at the event.

You may have heard of Argyll & Bute Council before. They gave the world a world case study in how not to do social media. You may recall they picked a fight with an eight-year-old who was blogging on the Never Seconds blog about her school meals. Jamie Oliver and others came in on the child’s side and they were forced to climb-down. You just know you are on a loser when even a sock puppet makes up a song about you…

By the looks of things there are enough people in Argyll & Bute asking questions that now need asking and I think that’s best left to people there.

Jo hasn’t commented on the matter but as organiser Nick Hill this week told Scottish media:

““I organised the conference where the allegations stemmed from and I told both the newspaper involved and the council’s investigation at the outset that Jo didn’t say any of the things she was accused of.

“This has been an extremely trying time for Jo, and I know she wants to thank everyone who has supported her: family, friends, the National Union of Journalists, colleagues and fellow communications professionals. This episode would have been much more difficult to weather without their efforts.

“I know Jo wishes Argyll and Bute Council all the success it deserves.”

1. Would the Never Seconds blog debacle have happened with Jo Smith in her post? It was clear that there was no handle on how to respond to bloggers. Or how to respond when things started to go wrong. A Twitter account that was silent but being bombarded with angry tweets is a case study in how not to. It shows the value in having a digital communications-savvy comms person on the bridge.

2.  This shows why it’s a good idea to be in a union. The National Union of Journalism stepped in to offer advice and legal representation. Not everyone knows it covers PR people too. I’m in it because you just never know when you’ll be in a situation that Jo found herself in.

3. Jo Smith is made out of stronger stuff than you or me. Weaker people could have gone under. Heaven knows there must have been some dark times but she battled through and can now hold her head up again.

4. It begs the question of what Jo now does about a sometimes digital foot print. In which some pretty vile stuff remains. She’d be entirely forgiven for taking a long hard think about that with her legal team.

5. There could have been a chilling effect on the sharing of knowledge across local government comms had Jo have lost. Many would have re-thought the benefits of speaking at conferences or even attending when the penalty for mis-quoting is the sack and potential career ruin.

6. Jo is an excellent and engaging writer. We were fortunate enough to take a guest post from her on comms2point0 last year based on her experience as a London 2012 games maker. You can read it here.

7. She now deserves to make a success of her life as she puts her experience behind her. With the determination she’s shown she will. Vindicat PR is her new venture and I hope she’ll continue as a contributor to comms2point0.