There was a curry house when I worked as a reporter who used to ring up every week to try and get into the paper.

This ranged from the actually newsy, like fundraising for Children in Need, to the not quite so, like we have a food hygiene certificate. Back then everyone used to have them. But then came the one to five start ratings for hygiene. They became something to shout about.

One council in the South West has thought-up a new way to shout about these certificates. Send out the environmental health officer to sing a Christmas carol with them.

Our Public Protection Team has been out checking food hygiene standards on the first day of @BathXmasMarket.
Look who’s on song with a festive 5 out of 5, @AngelfishCafe.👍🎶@VisitBath pic.twitter.com/GYILQLeSBt

So, on the fifth day of Christmas my true love gave to me a certificate with five stars on it.

A daft but effective way of celebrating a top score on what can be an important yet routine piece of legislation. Good work Dan Cattanach.

A day a year local government shouts about what it does.

I raise my hat to everyone who took part in the day and created content.

Seven years ago, this was purely a Twitter thing when it started as #walsall24. Over the years the Local Government Association has got involved to support it.

But now that Twitter is the 4th most popular social platform should it just be Twitter? I’m not so sure. If it is true to its aim of reaching people to tell the story of what local government does it needs to find the best platform. Probably, this is an array of platforms.

An additional worry in a discussion on the Public Sector Facebook group is that people struggle to create the time to make #ourday really work. But anecdotally, this does work as internal comms. It also works to encourage service areas to share their stories.

Here are five pieces of content that caught my eye

Nick Grimshaw has 1.3 million followers. He is from Oldham. The winner of their name-a-gritter competition was ‘Nick Grit-shaw’. So, as an Oldham boy made good he shared it with his followers attracting 30,000 likes.

Why is this good? This isn’t the council talking about what they do, it’s a Radio One DJ. That’s far cooler.

keeping your streets ice-free…. “Nick Grit-Shaw” I’ve made it 😂👋🏼

There used to be a cartoon strip called You Are the Ref where you were given a scenario and had to choose the correct outcome. Doncaster Council used Twitter to create a similar scenario only being faced with the challenge a council officer would face. It gave a taste of the difficulty council staff face.

A poem set to video

There are 1,200 services that local government does. It’s hard to cover them all. But a video of just over a minute covers much of the ground. Well done Bath & North East Somerset Council.

A snapshot of just some of the ways we help to keep your community running.@LGAcomms #OurDay #YourBathnes pic.twitter.com/IuyJacP7V3

Why is this good? It uses video so autoplays in your timeline. It covers a range of things in a short space of time.

The most popular Facebook update wasn’t a council service as such but a lost dog. Of course it was. It was never going to be an engineer filling in a pothole, was it? You can see it here. 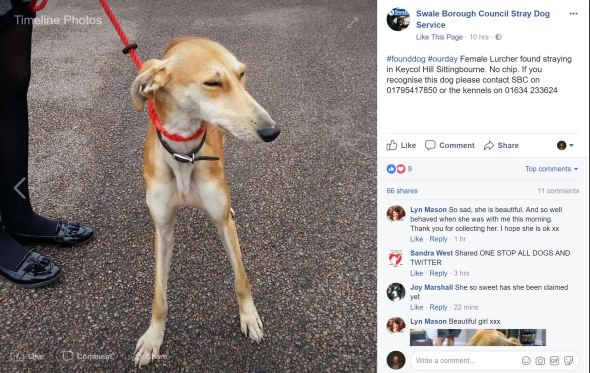 One of the benefits of #ourday is putting faces to names and to be able to tell people what they do, as this Derbyshire Dales Council tweet shows.

Busy day ahead for these 3 from our Clean & Green Team. Mick is our central litter bin emptier, while Andrew & Steve are preparing to help with the clearance of autumn leaves #ourday pic.twitter.com/SZ1iZwehB8

Why is this good? Because it tells you who those familiar faces are and what they do.

A Periscope broadcast to explain a guided walk

South Cambridgeshire has many attractive places and guided walks encourage older people to step out. Here the council used Twitter’s live streaming app Periscope for a council worker to talk about what the scheme is.

A clip-on mic helps to improve the sound.

Why is this good? Because it is getting out of an office and experimenting with technology.