VIRAL COMMUNITY: How the viral parking warden video started in a Facebook group… and what we can all learn 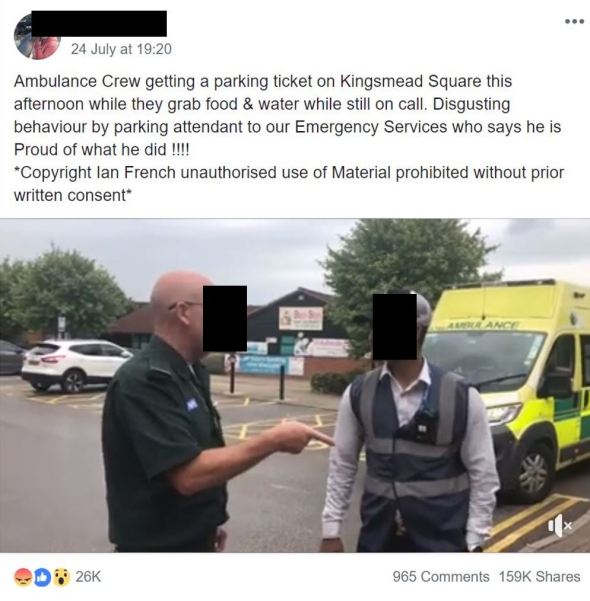 If you’re not thinking about Facebook groups you’re missing a huge chunk of how the population is consuming the media.

Your corporate page is fine. But the reality is that most people are in groups or following local pages.

Last year, I ran some research on what an average week looked like in a town of 150,000 people. The results blew me away. There were more than 570 groups and pages in the town of Braintree.

But that was a quiet week. How do things play out on Facebook groups and pages in a busy week?

Let’s take the example of the parking warden ticketing the ambulance.

You may have seen it.

A parking warden tickets an ambulance: how it plays out

A private parking warden is issuing a parking ticket parked on double yellow lines outside Tesco in Kingsmead Square, Northwich. The ticket is for a North West Ambulance Service ambulance and its crew remonstrate that they haven’t had a break since early morning and eight hours later they are buying water. Their vehicle is too big for a parking bay, they say.

A passer-by sees the incident play out, films it and intervenes, calls the warden ‘an idiot’ and uploads the video to the Northwhich Life Facebook group which has 23,000 members. This video alone is shared 158,000 times with 995 comments and 26,000 reactions.

But that’s the start of it. It gets picked up from the group by other news outlets and Facebook groups and pages.

Who shares it? ITV, BBC and a whole lot of newspapers that don’t cover Northwhich. Step forward Banbury Guardian, Mansfield Chad and Northampton Chronicle. Yahoo News and others further afield share it, too.

BBC and ITV local news boost the figures to more than two million views. You can see the ITV clip here.

The media story plays out

On Google Trends, the search term ‘ambulance parking ticket’ goes from zero to 100,000 in a day.

As Google News shows, the story is picked up quickly by the wider news media and an appearance on ITV’s Good Morning from a representative of the parking industry didn’t play out well for the industry.

The parking company didn’t issue the ticket. But things escalate anyway. Things are out of control.

London Cambridge Properties, who own the site where the parking attendant was contracted to patrol, issued a statement on the web and more than 24-hours later on Twitter to their 1,300 followers attracting one retweet, two likes and no comments in the first three hours it was posted. The West Midlands-based company’s LinkedIn page was unchanged.

And then things get a bit weird

On Facebook, there’s abuse for the parking warden. Heaps of it and some of it is borderline racist. There are comments calling for the warden to be sacked and far worse. When a mob forms – online or offline – it’s never nice.

And council Facebook pages get people complaining.  Even though they’re in another part of the country.

And the memes start. 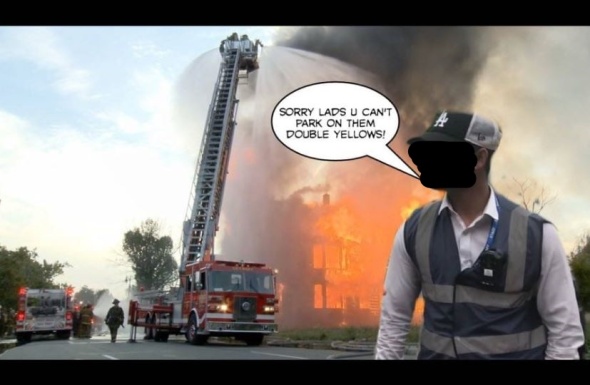 What we can learn from this

Anyone can shoot video with their smartphone and post it online.

It starts with one Facebook group and gets shared.

Things escalate out of control quickly.

When things escalate you can quickly lose any pretense of control of the issue.

You need to communicate swiftly.

There are many organisations in the frame here. Tesco. The landowners, the parking enforcement company and the ambulance trust.

If you have frontline public facing people they need to be well trained and have an expectation that they will be filmed in the despatch of their job. With that in mind, basic media training skills for public-facing staff are essential. Uppermost is how to respond if someone starts to film them.

When things escalate your staff can expect a duty of care from you as an employer.

EDIT: Cheshire police officer and Twitter vlogger @sgtTCS has gone through the incident from a police officer’s perspective here.

Train stations are emotional places. You say goodbye. You say hello. You lose a shoe getting onboard and get stranded in the rain.

It was raining. How was the poasenger going to reach somewhere where she could get a replacement pair?

@Accessorize sell shoes at Euston. We can pick you up in one of our assistance buggies and bring you up to save you getting wet. Let us know and I’ll organise. Which coach you in? ^JH pic.twitter.com/cYQXqZyYHj

An assistance buggy would pick up the passenger at the carriage door on arrival before taking her to a shoe shop. Beautifully simple and entirely human.

A cherry on top of the cake was the human tweet from Birmingham New Street.

We are proud to call you our sister Station ^EK https://t.co/JRiITfTtQx

Thanks Madeleine Sugden for spotting this.

It’s unplanned and ironic that the 30th post in this series is one from a railway company I’ve often despaired at.

London Midland were a train company that operated through the North West, Midlands and London. The trains I largely travelled on in the Black Country had no wifi, no plug sockets, no coffee and no tables. They also used to have their drivers poached.

But as a company their social media was superb. Human. Engaging. Real time. This company set standards their trains rarely did.  If you were sat outside New Street station and wondering why you were not moving along the tracks their Twitter would tell you in good humour.

So, their sign-off when their franchise came to an end was no surprise:

This is our stop. A different rail company takes over from tomorrow. It’s been a pleasure! You can find all your travel information over at @LNRailway or @WestMidRailway. All change please. pic.twitter.com/IeuEouFKd8

BIG DIGITAL: Digital comms is much, much bigger than comms 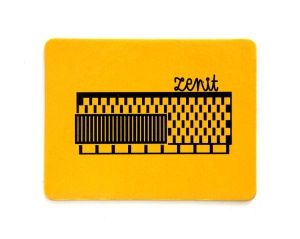 At the Association of Police Communicators event in Grantham I bumped into someone I hadn’t seen for a while After exchanging pleasantries, I asked what was keeping them busy.

A conversation that challenged

“Actually, I’m wondering about taking digital out of communications altogether. Because it should really be in other parts of the business too.”

They then spoke about the £70,000 they’d saved someone else through a digital process.

There’s a good point there. But take digital comms out of comms? It’s good to be challenged.

There’s certainly no point in having a lovely piece of digital communications on a wider process that’s a bit rubbish. Or for comms people to sit in a room and never talk to anyone or be involved with anything.

A paragraph that chimes

Then I read this from the digitally talented Sarah Lay who left her local government job recently.

For you see all communications and communicators should now be digital – they should be equipped with the skills and knowledge to work to the demands of digital, often as the primary channel. But digital is not purely communications – it is also customer service, it is IT and technology, it is behaviour and analytics, it is marketing and product / service development.

Don’t just communicate for the sake of it. Work out why you are communicating then measure it. That way you can look finance in the eye.

11 Things A Public Sector Social Customer Services Should Have

It’s always good to see slow burning success… and even more so when it comes for people who have worked hard on it.

John Fox spent a fair chunk of time at Sheffield City Council on a range of projects and working to get customer services engaged with the social web was one. I helped John wearing my comms2point0 had for a couple of days with this by showing what was possible. The baton has now been taken up after John’s departure which is good to see.

John has moved on to other things but Sheffield City Council has emerged on Twitter and has a dedicated customer services stream. It is early days but shows all the signs of being a success with a human voice.

Good morning. The sun is shining and its Stuart here again @SCC_Help

It’s prompted me to re-blog the customer service post I made a while back and re-issue the reminder to comms teams to demonstrate their worth as a nit by making friends with this service and see how they can work better together – particularly on the social web.

11 things a public sector social customer services stream should have…

It should say when it’ll be monitored. 9am to 5pm Monday to Friday is fine so long as you make that clear. You’ll get more brownie points dealing with things out-of-hours but sometimes this just ain’t possible.

It should be staffed by real people. It should be authentic. Human. It should talk about the weather if it’s raining cats and dogs. That’s fine.

It should speak human. It should talk in a recognizably human way. Like real people do. It shouldn’t talk in jargon.

The actually doing it…

Start the day with a tweet from a real person. Close it the same way, too. Train operator London Midland do this beautifully.

Acknowledge the query. People don’t expect fully formed answers within the hour to complex problems. They know life isn’t always like that. But they do want to know you are on the case. The tweet that says: ‘Thanks for your tweet. Will find out for you’ is fine in the short term.

Get back in 24 hours or less. And make a point of saying this on your Twitter bio.

Have a few people trained up. Not just one.

Never argue with an idiot, is what my Uncle Keith once told me. How right he was. How much of a web visionary he was, too. If you can help then help but if people shout, swear or troll you are probably better off spending your time answering other queries. Michael Grimes of the Citizenship Foundation’s seminal blogger engagement guide works well.

When in doubt think what you’d do if this conversation was taking place on the telephone. Which, when you think about it, is a lot more tricky than Twitter. You have to talk to people directly in real time. How tricky is that?

Use the channel as two way. Getting a flood of telephone calls about bin collections? Maybe a Twitter update and a piece on the website can help.