← GROUP WORDS: Here’s a post to keep you up to speed on tweaks to Facebook groups
SHOT LIST: 8 key lessons on how to make engaging video from joe.co.uk →

LONG READ: What we can all learn from the #GrabBag hashtag blow back

So far this year we’ve had flooding, extreme heat and dams that almost collapse.

In the rest of the year we have the prospect of snow, ice and the impact of a possible ‘no deal’ Brexit with government modelling of food shortages, medicine shortages

Trust is low with around a third of us trusting government officials and journalists with politicians generally trusted by a fifth of the population.

So, how do you get across the need to prepare for possible future emergency?

With great difficulty it seems.

A tweet from Police Scotland appeared to set off a mix of alarm and mirth with the  #GrabBag hashtag trending and BBC News picking up the baton online and in broadcast.

A number of police and councils have also used the hashtag along with #30days30ways to ask people to get ready in peacetime ahead of any emergencies ahead.

The aim is positive but in an atmosphere of mistrust, it can very easily go off target.

With some possible alarming days ahead its worth taking a pause to reflect on how we can pull this stuff off. It’s long been a frustration of mine that emergency planning is always 9th on the ‘to do’ list, never rises above that and gets ignored until its too late.

Here’s a quick look at the content in and around the #GrabBag hashtag.

Well this is random and a bit scary, still, I’m taking bets.

I think if police stations up and down the country are going to start simultaneously suggesting we pack a #GrabBag they should at least hint as to why. A zombie apocalypse is going to need a very different packing strategy to an AI takeover, for example.

WTF is #GrabBag all about.
Why would we have to leave our homes ?
Monsoon? Forest fire? Hurricane?
I notice that the police and councils up and down the country haven’t said WHY we might need to evacuate quickly. I have never know a campaign like this and it is fucking scary.

But any good analysis should look at the data, too.

The hashtag had also spiked impressively in the analysis. 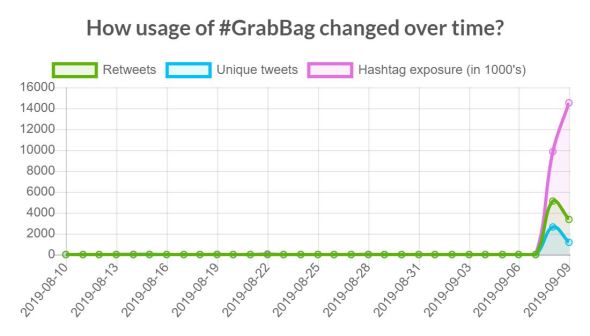 However, the big problem with hashtag analysis is drilling down into sentiment. The US-based algorithm is incapable as yet of spotting sarcasm leading to a manual analysis of what people were really saying.

Sarcasm, worry and brand jacking emerged, the analysis suggests, and the original purpose of the hashtag was obscured. 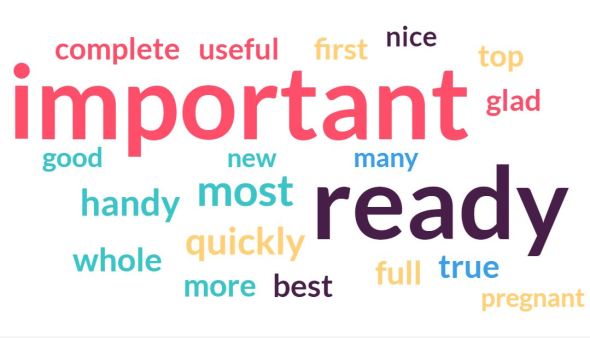 The most frequently used negative ones less so…

But what were the trends to a UK audience? I went through and counted a cross-section of around 150 to give a snapshot of the underlying sentiment.

Counting through the content, the sentiment was overwhelmingly parody with supportive tweets being outscored four to one.

The original tweets with the original purpose had been swamped by people who were either pouring scorn or were entertained by the idea of a #grabbag full of gin. Hey! Big LOLs! There’s an argument that any publicity is good publicity. I’m not convinced by that argument.

But there was also a more worrying undertow, too. Did the Police know something they didn’t? Shouldn’t people be more responsible? Who was responsible for all this? This is 2019, we’re talking about. There was even a flavour of newsjacking with big brands trying to cash-in.

So, armed with all this, what does it tell you?

Well, first up, I’m not going to suggest anything stupid like stopping tweeting. Police and local government people who tweet have my undying admiration. I used to be one. Whoever launched the hashtag should be applauded for trying to tackle a serious issue. But the episode does provide some teachable moments that we can learn from.

The public sector should still tackle the big issues

The temptation after adverse publicity is to go into a bunker and maybe delete your account. ‘No,’ and ‘no’ to that. There is a need to communicate in the places where people are. Besides, its a legal obligation for the public sector to warn and inform.

When things go awry I think Cadbury’s and Easter

Every year the meme re-surfaces that Cadbury’s have banned the word ‘Easter’ from their Easter eggs. It spreads across the internet like wildfire. It’s political correctness gone mad. Angry people bombard Cadbury’s with messages to say how outraged they are.

The only thing is that Cadbury’s haven’t banned Easter at all.

The chocolate manufacturer when this first happened where faced with a choice. Either ignore it or talk back. They chose talk back. Like a giant version of whack-a-mole their team mans the ramparts to try and tweet back to people who complain online.

@geordieron40 There’s no policy to remove ‘Easter’, it’s mentioned on the back! As a seasonal treat they’ll always be linked with Easter

Active rebuttal in the manner of Cadbury’s when things have gone a bit awry is something to deploy. If the message out there is that the police want you to pack your bags because… something BAD is about to happen that feels like something to address.

Equally, it wouldn’t go amiss to respond to some of the parody tweets with a degree of wit and humour.

Yes, it helps to direct people towards your message.

Get by with a little help from your friends

The public sector is great but often vital campaigns are launched in a corner of the internet. With #GrabBag, I didn’t see the combined might of the public sector combining. It would have been good to see partners, friends and the rest of the organisation come to the fore to amplify any explainer tweets.

Tapping into your internal comms and companies

If we don’t trust government officials, who do we trust?

Well, it turns out we trust our employers far more. Perhaps surprisingly, even those who think the system is failing them put their trust in their employers. The Edelman Trust Barometer puts 69 per cent of those with a cynical outlook as still trusting their employer.

That’s a massively powerful figure and one that invites a real re-calibration your message. Have a loudhailer. But add companies’ internal comms channels to your loudhailer. It’s also enlisting your own internal comms too for public sector organisations are not just big employers but they’re big local employers.

Thanks for reading. You can find me @danslee on Twitter and dan@danslee.co.uk by email.