DIGITAL LEADERS: Vital lessons from a human leader and a lone dancing nut

Three great things happened in local government in the West Midlands last week and it’s been a while since that happened.

Firstly, new Birmingham City Council chief executive Mark Rogers posted his first blog in his first week in charge there… and it was human. It didn’t fall into the trap of councilspeak. Or jargon. It felt like it was written by a real person. Online, the mood of staff and those who care about the city rose by several degrees. You can read the blog here and see some of the reaction here. 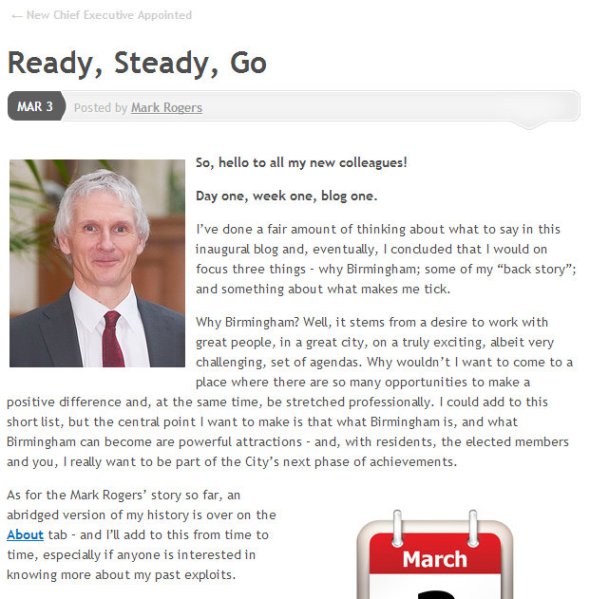 Okay, so this is a small step and ranged against the good times is the small matter of the £822 million that needs to be saved from Birmingham’s budget, the need to sell-off the flagship NEC, the 1,000 jobs that will go this year and the need to turn around the giant super-tanker pretty darn quick.

The task facing Birmingham City Council is immense. It’s going to hurt. But the knowledge that there is a human being in charge gives an injection of hope and the knowledge that the city stands a chance. You could argue that from this point on Mark will never be as popular. You could also say that times must be bad for public sector when a demonstration of being obviously human behaviour from someone at the top gets such a warm welcome.

Secondly, Mark started to engage with people online and Twitter saw a few human interactions between the bloke in charge and the bloke who does things for him as a far smaller part of the wheel. He even quoted Joe Strummer.

@MKMRogers inaugural blog http://t.co/UGtVpovTeR <if he keeps this approach up, there’s a chance @BhamCityCouncil could reinvent local gov

Lessons from a dancing nut

(QUICK NOTE: THE YOUTUBE CLIP REALLY IS A KEEPER SO DON’T SKIP IT.)

To quote the narrative spoken by Derek Sivers who posted the video:

Now here’s the second follower… this is the turning point. It’s proof the first has done well. Now, it’s not a lone nut and it’s not two nuts. Three is a  crowd and a crowd is news.  A movement must be public. Make sure outsiders see more than just the leader. Everyone needs to see followers because new followers emulate followers.

Now we’ve got momentum. This is the tipping point. Now we have a movement.

Leadership is really over-glorified… there is no movement without the first follower. When you see a lone nut doing something great, have the guts to be the first person to stand up and join in.’

So, that’s three lessons for leaders delivered by social media by one lone bloke in a suit in less than a week.

3 Comments on “DIGITAL LEADERS: Vital lessons from a human leader and a lone dancing nut”